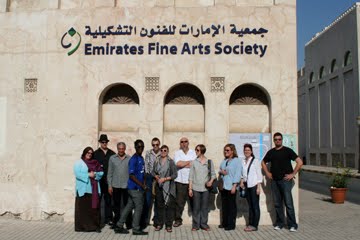 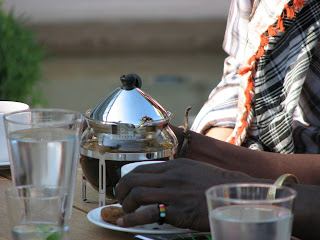 The United Arab Emirates (UAE) was not on my “100 places to visit” list, but when my work was accepted into the 29th Annual Exhibition of the Emirates Fine Arts Society, held at the Sharjah Art Museum, I was given the opportunity to attend. Before I knew it I was onboard a jet at Philadelphia Airport, January 7, 2011 on my way to Dubai International in the UAE, heading back in the same direction from which I had come from 49 years earlier in 1961. Philadelphia was my point of entry into the United States, arriving at a young age from my place of birth, Lahti, Finland. Naturalized as a US citizen at the age of six, I have recently applied and been granted dual citizenship with my mother country Finland. This new found status as a citizen of the European Union and Nordic Council opens up the potential and desire to interact with the world as a holistic global community.

Flying out of the country, I felt handicapped with a lifetime of ethnocentric cultural bias deeply rooted in a western mind set. And undoubtedly, my limited perspective of the Middle East has continuously been shaped by the media I have been exposed to. Saying I was an open minded person and being open minded are two different things and immersion into Islamic culture would be a great test of my flexibility. Along with having little time to prepare, I have set a challenge for any journey that is documented by my artist statement: “By questioning the beliefs of myself and others, and confronting societal issues such as prejudice and racism, gender bias, consumerism, pollution, and natural resource depletion, I hope to dissolve dualistic thinking, identify non-sustainable practices, and promote more cooperative relationships between people and the planet.”

At times, feeling hypocritical when I read this, I am also learning to be patient with myself while transitioning to better way, setting high ideals in order that I might someday aspire to them. A gift of being an artist lies in having the ability to initiate an honest dialog without words. Contemporary art is a universal language transcending ethnic barriers, a sublime vehicle of heart to heart and mind to mind communication. Our group of Americans, one Ghanian, and one Korean artist, showing our artwork together in one museum, reveals our likenesses as human beings rather than what can sometimes be alienating cultural differences.

The Emirates are developing a strong center of culture and commerce, attracting the entire global community. The core of this expression is displayed with their innovative structural achievements, one of which includes the tallest building in the world. Architecture is an artistic expression that can transcend social norms. To stand in awe may be the closest experience any of us will have with what we perceive to be divine. Looking out from 160th floor of the Burj Khalifa in Dubai, towering at 2717 feet, was a truly awesome experience, reminiscent of times in my past spent above tree line. Mountaintops may have given birth to the dreams and visions of skyscrapers reaching for the heavens and been the inspiration for their construction, but it was human effort that climbed those mountains and built those monuments testifying to one facet of the human potential.

My short stay of eleven days revealed only a microcosm of Arabic culture, but it was a positive life changing experience. I was less impressed with the architectural spectacle than the peacefulness, generosity and kindness of the people I met during my stay. H.H. Sheikh Sultan Bin Mohammed Bin Sultan Al Qassimi, Crown Prince and Deputy Ruler of Sharjah, attended the opening of the art exhibition and took the time to shake my hand and ask about my artwork as he did with each of the attending artists. It was an honor to meet him and experience first hand the government’s generous support of the arts. The Sharjah Museum, under the patronage of H.H. Sheikh Dr. Sultan Bin Mohammed Al Qassimi, Member of the Supreme Council and Ruler of Sharjah, hosted the Emirates Fine Arts Society annual event which was made real by the Sharjah Museums Department, with an experienced installation team, an immaculate, almost divine, gallery space, and refreshments, provided as needed during our press conference and lectures.

Arabic culture has touched me deeply on a heart level pointing more to my own shortcomings rather than those of a foreign culture. I was humbled by the discipline of the masses to stop what they were doing and be mindful of the sacred. The calls from the mosques were contagious and each time I heard them I became more still and took time for reflection myself. They don’t feel so far away to me anymore. If there’s one thing the world needs now it’s more places conducive to a peaceful cross cultural exchange and dialogue. The Emiratis have opened their home to the world, hopefully we will continue to be humble guests with open minds and hearts ready to receive the many gifts they offer and give them the best of ourselves and culture in return.